A 3-sided shower enclosure
against the odds!

With Christmas fast approaching we received a call from a gentleman wanting our help. Builders were completing some renovation works at his house in Islington, North London, involving the remodelling of both his bathrooms. There was an element of urgency with this call as his wife was expecting their first child in the next few weeks and neither bathroom had a shower enclosure!

The client was led to believe his builder had the situation under control, having placed his order for the shower enclosure glass with a well known tile shop who also supplied shower doors, some time previously. However, once all the walls had been tiled it became clear that the doors they bought would not fit because the final measurements were outside the adjustment range of the ‘off-the-shelf’ shower doors.

The client and the builder had to find a company who could come and survey the ‘out-of-plumb’ walls and build a bespoke, 3 sided sliding shower enclosure to fit the bathroom. It had to have a sliding door as there was a bath in front of the shower which would have prevented a hinged door from opening. Not only that, but they wanted the new three-sided shower enclosure to be manufactured and installed before the arrival of the new baby!

The builder contacted us after finding us online and we managed to carry out the survey, manufacture and installation of the custom-made, three sided shower within 3 weeks and before the new baby was born.

As the UK’s leading specialist in bespoke shower screens we are frequently asked to create shower enclosures for difficult spaces or uneven surfaces such as those found in heritage properties. You can see some further examples of these types of projects here. 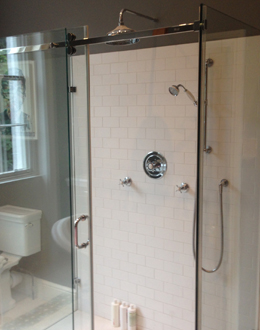