This bespoke frameless opaque cylindrical shower enclosure project was undertaken for a private client in the exclusive Regent’s Park area of London.

The glass used was 10mm laminate with a diffused interlayer for an opaque glass effect – a practical way of creating privacy without necessarily having a separate room for the shower enclosure.

Laminated glass is a type of safety glass made from two or more sheets of glass bonded together by an interlayer. When impacted the glass is held together by the interlayer, limiting the damage and ensuring there are no large pieces of sharp glass to cause damage or injury. Again this is a practical solution to a stand-alone shower enclosure in a relatively exposed position.

The original shower had been in situ for some 15–20 years and, over time, moisture had found a way between the glass panels to the interlayer. This resulted in the interlayer breaking down and allowing bacteria to turn the glass black.

Our client had found a company to reproduce the existing glass for him. However they were not prepared to carry out a preliminary site survey or remove the old and fit the new. At this point the client found Showerpower and got in touch. We surveyed, dismantled the old shower enclosure and fitted the replacement, paying extreme attention to any joints that would be vulnerable to water ingress. Not easy in a shower cubicle!

The finished bespoke shower was fitted from floor to ceiling and for total stability was located into a recessed channel in the floor, wall and ceiling.

This custom-made shower project was completed June 2016 and the client was not only overjoyed with the end product but also our professional service from start to finish. Here’s what had had to say about us and our professional installation team …

“I wanted the euphoria to subside before saying thank you. The new glass enclosure looks fab, and we are delighted. A special thank you to Darren, Nick, and Charlie. Both the removal, and the installation were very challenging but they prevailed, and were highly professional, and industrious throughout. Wouldn’t hesitate to use Shower Power again”

A challenging situation needn’t stop you having the bespoke, frameless shower you want. At Showerpower we specialise in creating stunning bath, shower, wetroom and spa enclosures even where there are uneven walls, restricted spaces or in heritage or listed properties. We are based in Sussex and work in Surrey, the home counties and throughout Greater London. For a call-back or brochure please contact us now. 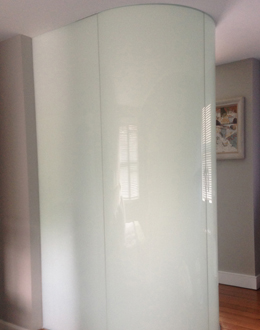