Case Study: The Super Yacht and a curved shower screen

This is a story of a super yacht and a curved shower screen.

“Will you carry out a site survey for a shower door in the south of France?”  was the question asked by a potential customer on the other end of the phone earlier this year in the Showerpower™ office. “It’s not somewhere we normally get asked to visit sir, what seems to be the problem?” replied our chap in the office that morning.

The gentleman phoning from the marina in Nice, was a captain of a 40m Cypriot-owned super yacht. The curved shower screen in the master suite had broken because it had not been stowed correctly and a replacement was unavailable from the original manufacturer as they had discontinued that range. Now the captain had the issue of sorting the problem before the owners flew into Nice to set sail on their boat for one of their many sailing trips.

We decided to rise to the challenge!

The shower was curved and needed surveying and templates made. Two days later we flew one of our technicians to Nice who carried out a full appraisal. He decided the best course of action, and to prevent this issue arising again, was to build the replacement from un-breakable clear Perspex – an ideal solution to cope with the rigours of a shower in this situation. Using this material also meant that we were able to manufacture the replacement screen without having to wait on the various processes usually associated with traditional glass and of course, Perspex weighs less – an important factor when working with boats.

A new door was supplied and fitted in a matter of days and in time for the owners start of their holiday. 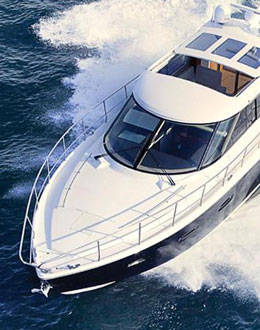